This is the 24th chapter in the revised online version of The Republic of Rumi: a Novel of Reality. Islamic concept of freedom is explained here with reference to the mysteries of the sacrifice offered by the Prophet's grandson Imam Husain. Also, the five clues that you were given about Joseph are reinterpreted here in the light of the five elements of the Islamic conception of nation (Unity, Prophet-hood, brotherhood, equality and freedom) presented in the last few chapters. 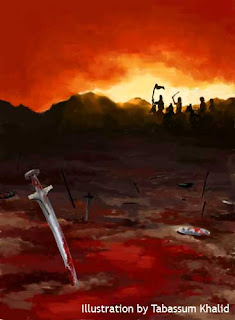 Husain appeared at a time when monarchy was being introduced in Islam for the first time. He was the reason why some of the things you observed from the latter history became possible in the first place: a king trembled upon receiving a message from Bu Ali Qalandar, Mian Mir rebuked a land-hungry emperor, Sultan Murad humbled himself before the writ of the Quran and so on. Monarchy stayed in the history of Islam for centuries after Kerbala but Husain had taken away its legitimacy in the secret life of civilization. The meaning of jihad also gets explained now.
The Poet’s conception of freedom, equality and brotherhood seems to be rooted in those deeper layers of history which have been touched upon here. It require fulfillment of duties before claiming rights, a strength to rise above vengeance before dreaming a revolution and a vision of destiny that enables the individual to act as if the mind had before it the whole of the future with innumerable possibilities enshrined in it, including those possibilities that may never materialize. Kerbala is the epitome of this kind of action. With a different strategy, Husain may have won the battle or overthrown the usurper but the option he chose was reminiscent of sacrifices, offered not just by saints but prophets. He “reprogrammed” history for all times.
Previously, your five clues had revealed meanings with reference to the self: (a) “Rumi and Iqbal” became established as followers of Prophet Muhammad; (b) “Kings” became pointers for state, law and government; (c) “Joseph” remained unknown but became closely associated with transcending the limitations of physical existence; (d) “Sufism” turned out to be those who open the doors of the world with the key of religion; and (e) “Time” happened to be a non-linear entity pointing at endless options. New meanings appear now, and they are related to the act of voluntarily giving up freedom of choice in order to become rich in love, or what is called selflessness in the Garden.
Each of your five clues has now become connected with one of the basic principles of the Muslim nation:
· Rumi and Iqbal – Unity of God: Unity of God puts an end to despair, grief and fear, and therefore these have not been permitted by the Poetics of the Garden, since the Garden is founded on the principle of Unity.
· Kings – Prophet-hood: the Muslim nation was founded by the Prophet and although kings became its custodians for a certain time in history, wielding the state, laws and government, their “inward” power was moderated by the aims of the Prophet’s mission (freedom, equality and brotherhood), whether a king liked it or not.
· Joseph – “Brotherhood”: Although still unknown, Joseph has become obviously connected with the phenomenon described by Bu Ubaydah, where each individual voice becomes the voice of the entire community but nobody loses their originality (such a thing may not be conceivable without some kind of freedom from restrictions imposed by the physical existence, and you already noticed in the other part that Joseph is connected with gaining control over one’s body).
· Sufism – “Equality”: You had already understood Sufism as opening the door of the world with the key of religion, and just now, you witnessed a Qazi establishing equality between the ruler and the ruled through the power of the Quran, but on the flipside it shows that a door opened on “the world” with the “key of religion” may not give a world envisioned by the Quran
· Time – “Freedom”: Time had already been explained in the Garden to be non-linear and containing endless possibilities but freedom, as emerging from the mystery of Kerbala, points at the probability of acting in such a manner that even the unforeseen possibilities of the future are taken care of.
Posted by Khurram Ali Shafique at Sunday, April 11, 2010