23. The Pillars of Nationhood

This is the 23rd chapter in the revised online version of The Republic of Rumi: a Novel of Reality. This chapter defines the two basic "pillars" of Muslim nation, which also explain quite a few things about the Garden of Poetry which the reader is visiting. 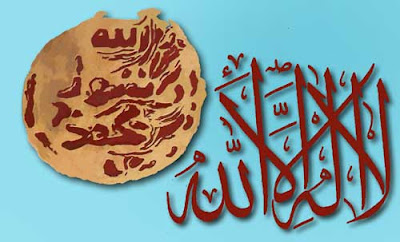 The next chapter is ‘The Pillars of the Muslim Nation.’ There is no god except God, and Muhammad is His Messenger.This is the basic statement of Muslim faith, and the Poet derives two pillars of Muslim nationhood from this:
The First Pillar: Unity
“Despair, grief and fear are the mother of abominations and they destroy life,” the inscription on a small section near the first pillar tells you. “Belief in the Unity of God puts an end to these foul diseases.”
Quite a few things about the Garden come together in this heading. The Garden is based on the law of non-contradiction, which is an aspect of Unity. Despair, grief and fear are incompatible with Unity, and literature which promotes these values has been denounced in the Poetics of the Garden. The point is further elaborated through a couple of parables.
Emperor Alamgir and the tiger

The Mughal Emperor Alamgir is offering prayer in his camp. A tiger appears and attacks him. Rather than disrupting the prayer, Alamgir takes out his dagger and smites the beast.

“Fear of God is the only caption to faith whereas in every other fear there is the seed of contradiction and unbelief,” says the Poet. “Whatever evil lurks within your heart can be traced back to fear. Since it is weakened when zeal is high, it is most happy in disunion.”

Kings were usually held in contempt in ‘The Secrets of the Self’ but now Alamgir, a king, has been presented as a hero. This can provide a kind of symmetry between the two parts: if a king trembles before a mystic, or a saint dares call a king a beggar, then those are “the secrets of the self”. If a king humbles himself before the fear of God, then this is part of “the mysteries of selflessness”.
The Second Pillar: Prophet-hood
You move to the second pillar, which is prophet-hood. “The purpose of Muhammad’s mission was to found Freedom, Equality and Brotherhood among all human beings,” you are informed by an inscription nearby. “His sword answered Amen and extirpated the race of kings,” you may recall that about the Prophet from the other part of the enclave. “In his sight, high and low were equal.” That seems to fit with what the Poet is telling you now. “By his might he shattered every ancient privilege, and built new walls to fortify humankind. He breathed fresh life in Adam’s weary bones, redeemed the slave from bondage and set him free. His birth was mortal to the ancient world and freedom was born out of his holy heart. The world’s new age, its hundred lamps ablaze, opened its eyes upon his living breast. He drew on Being’s page the new design, brought into life a nation of conquerors, a people deaf to every voice but God’s, a moth devoted to Muhammad‘s flame.”
The inscription listed freedom, equality and brotherhood as aims of the Prophet’s mission, but the parables explaining them are appearing in the reverse order: brotherhood, equality and freedom. The inscription was the formation of ideals whereas the parables are bringing them to birth (“the life of the self comes from forming ideals and bringing them to birth,” you may remember). When ideals come genuinely from the self, the processes of their formation and birth may happen in opposite orders, as is the case with living things: a fetus in the mother’s womb develops a symbiotic relationship with the mother at initial stages and starts receiving nourishment from her body much before developing consciousness, but consciousness starts developing soon after birth while a symbiotic relationship with society, humanity, Nature or God may only be acquired at an advanced stage, and not without some effort.
Freedom, equality and brotherhood now appear in the reverse order, each embodied in a parable.
Bu Ubaydah and Jaban: the Islamic concept of brotherhood

The Arab army has overthrown the Persian Empire soon after the death of the Prophet. Jaban, Supreme Commander of the Persian armies, hides his true identity from his captor, a foot soldier, and seeks pardon for his life, which is granted until others find out who he is. The matter is brought before Bu Ubaydah, the Arab commander, and the generals are now asking for the blood of Jaban.

“Friends, we are Muslims,” says Bu Ubaidah. “We are strings upon one lute, and have a common melody. It is still the voice of the masters, even if it comes out of the throats of slaves. Each one of us is trustee to the whole community and is one with it in malice or in truce. Since the community becomes the substance of an individual’s soul, the promise given by an individual is as good as treaty signed by the entire nation. Though Jaban was an enemy to Islam, a Muslim has granted him immunity. O followers of the Holy Prophet, the blood of Jaban may not be spilled by any Muslim sword.”

Sultan Murad and the architect: the Islamic concept of equality

Sultan Murad, the Ottoman emperor has found fault in the work of a mason who was assigned to build a mosque. In a fit of rage, the emperor cuts the poor man’s hand.

The mason files suite, and the king is summoned. The judge recites from the Quran: “There is life for you in retribution.” Then he adds, “The emperor’s blood is not of a richer hue than the mason’s.”

Trembling before the grandeur of the Quran, the emperor folds back his sleeve, offering his hand. The plaintiff is overcome with commotion and recites another verse from the Holy Book: “God bids you to act with generosity as well as justice.” Then he adds, “I forgive in the name of God and the Prophet.”

The Islamic concept of freedom: the secret of the incident of Kerbala

Early Muslims chose their rulers through consensus, but now a caliph has died nominating his son to succeed him. Yazid, the successor, demands allegiance.

Husain, also known as Shabbir, is a grandson of the Prophet and the son of Ali. With only seventy-two companions including women and children, he sets out to take on the usurper but is ambushed in Kerbala, a place on the bank of the Euphrates in the Syrian Desert.

The hordes have been sent by Yazid, an incarnation of Pharaoh, the epitome of cold reasoning that cannot see beyond the chain of cause and effect, and therefore cannot build without intending to destroy.

Husain rises like Moses, an epitome of Love, which acts through the unknown potential of the soul and destroys only in order to reconstruct. Husain is slain along with all male descendents of the Prophet’s family except one, but he has managed to draw out the sword of No-god and write with its blade, on the sands of Time: “Except God.”