This is Chapter 31 from the revised online version of The Republic of Rumi: a Novel of Reality. With reference to the German “Thinker of Life” Goethe, the reader is informed here about the impending rise of the “New Adam” which is the reader themselves. 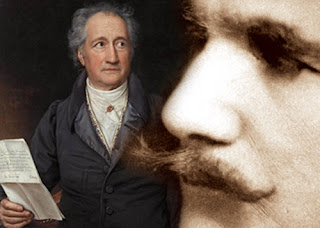 The second enclave is A Message from the East. It appeared in 1923 and much was added to it a year later.
The atmosphere changes as soon as you enter this part. In the previous part, you have seen that the Garden has been woven with the meanings of the Quran and it represents the secret life of the Muslim nation. Despite this, in the very introduction of A Message from the East, the Poet introduces you to a Western poet and thinker – Johanne Wolfgang von Goethe (1749-1832).

A Message from the East

It is at the beginning of the nineteenth century. The French conqueror Napoleon is ravaging , and but living in the duchy of Weimer in his native , Goethe is remained remarkably untouched despite his admiration for the genius of Napoleon.
Goethe’s many influences have included Persian literature – an elder poet has advised him to pay attention to Saadi of Shiraz who said, “Children of Adam are limbs to each other, since they are of the same pure essence” while a contemporary has dramatized the fourth story from the Seven Beauties of Nezami Ganjavi. Ferdowsi and Attar have also influenced Goethe but his love of reaches a new height when he gets to read the Divan of Hafiz in German in 1812. is in bad shape, Goethe is sixty-five but the music of Hafiz arouses in his imagination a mighty storm. In the songs of the nightingale of , he perceives his own image and begins to hallucinate that he was Hafiz in an earlier existence, and that the knowledge of mysteries has somehow survived in him.


Still, he is not an imitator of any Persian poet and his glance rests only on those Oriental truths which his Western temperament can assimilate. He calls a book of his poems the West-Eastern Divan, and at the beginning of the next century, the book falls in to the hand of an Indian who has felt similar associations with Hafiz and knows the German language. He is Iqbal, the Poet, who is a knower of secrets like Hafiz and Goethe. He writes back to Goethe after one hundred years and calls his book A Message from the East. That is where you are now.


“The internal unrest of the world’s nations, which we cannot assess properly because of being ourselves affected by it, is the fore-runner of a great spiritual and cultural revolution,” the Poet tells you.


This observation is also true about the present stage in your journey through the Garden: just like “the internal unrest of the world’s nations” in the Poet’s times, there now seems to be an internal unrest in the Garden since chapters on the Muslim nation and Quran have been followed immediately by the glorification of a Western thinker, Goethe.
You cannot assess this internal unrest properly since you are yourself being “affected by it” just as the Poet’s generation was being affected by the internal unrest of nations. If that unrest was “the fore-runner of a great spiritual and cultural revolution” then the unrest of the Garden could be “the fore-runner of a great spiritual and cultural revolution” in your “self.” You may remember that such a revolution was the promise held out in ‘A Parable Never Told’ that started you in search of Joseph in the first place.


You had five clues about Joseph, whose meanings became evident in the chapter on Love. Now the ‘Introduction’ to A Message from the East seems to be modernizing them if you could read between the lines:

“Europe’s Great War was a catastrophe which destroyed the old world order in almost every respect, and now out of the ashes of civilization and culture Nature is building up in the depths of life a new Adam and a new world for him to live in, of which we get a faint sketch in the writings of Einstein and Bergson. has seen with its own eyes the horrible consequences of its intellectual, moral and economic objectives and has also heard from Signor Nitti (a former prime minister of ) the heart-rending story of the West’s decline. It is, however, a pity that ’s perspicacious, but conservative, statesmen have failed to make a proper assessment of that wonderful revolution which is now taking place in the human mind.

“Regarded from a purely literary standpoint, the debilitation of the forces of life in after the ordeal of the war is unfavorable to the development of a correct and mature literary ideal. Indeed, the fear is that the minds of the nations may be gripped by that slow-pulsed ‘Ajamiyat which runs away from life’s difficulties, and which fails to distinguish between the emotions of the heart and the thoughts of the brain. However, America seems to be a healthy element in Western civilization, the reason for which perhaps is that it is free from the trammels of old traditions and that its collective intuition is receptive to new ideas and influences.

“The East, and especially the Muslim East, has opened its eyes after a centuries-long slumber. But the nations of the East should realize that life can bring about no revolution in its surroundings until a revolution takes place in its inner depths and that no new world can take shape externally until it is formed in the minds of men. This ineluctable law, which has been stated by the Quran in the simple but eloquent words, ‘Verily, God does not change a nation until it changes itself’ governs both the individual and the collective spheres of life; and it is the truth of this law that I have tried to keep in view in my Persian works.

“In the present-day world, and especially in Eastern countries, every effort which aims at extending the outlook of individuals and nations beyond geographical boundaries and at reviving or generating in them a healthy and strong human character is worthy of respect.”

The meaning of the five clues has changed because now you know who you are. You are the New Adam.
Posted by Khurram Ali Shafique at Sunday, April 25, 2010