This is the 30th chapter in the revised online version of The Republic of Rumi: a Novel of Reality.It concludes Part 2 (out of 7) of the narrative. 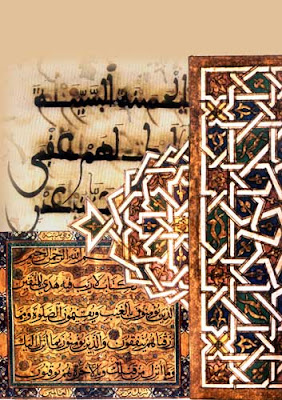 You have come to the end of the enclave. At the end of the first part, the Poet prayed to God and here he is addressing the Prophet.
Petition to the Mercy for All Worlds

“You gave me this lute,” the Poet is saying to the Prophet, who is Mercy for All Worlds. “You see all that is in the hearts. If my words are informed by anything but Quran, and if my heart is without luster, then expose me and guard your people against the mischief of my wickedness. Choke the breath of my life and disgrace me on the Day of Resurrection by stopping me to kiss your feet. However, if I have threaded the pearls of Quran’s sweet mysteries on my thread and spoken the truth to the Muslims, then pray to God that my love be reconciled with action.”
If the Prophet sees “all that is in the hearts” then the Poet has no need to inform him about anything, but this was his best way of informing you that the Garden has been based on Quran.
This means that the Garden is a literary representation of the Muslim, since it is based on the Quran too. As a literary representation of the Muslim nation, its structure is supported on the Pillars of the Muslim Nation: Unity, Prophet-hood, brotherhood, equality and freedom. It is not restricted to any time or space, and your entry is not subject to your domicile, showing that the Muslim nation is not bounded by space, country is not the foundation of nation and the Muslim nation is timeless too. The Garden, representing the Muslim nation, has been interacting with you and its structure has been based on the Quran, showing that a nation is organized only through a constitution, and the constitution of the Muslim nation is the Quran.
As a literary representation of the Muslim nation, the Garden has acquired power from the Divine Law, beauty from the manners of the Prophet and the ideal it is perpetuating is Unity. Just as you are controlling the “inward” and “outward” forces of the Garden, so the Garden is controlling you, showing that the expansion of national life depends upon controlling the forces of the universe.
These were “secrets of the self” and “mysteries of selflessness” that could not have been explained unless they were first experienced by you. In this first enclave, Secrets and Mysteries, you were not far removed from the prior experience of the outside world, including many which might be contrary to these truths, and hence you were asked to banish all previous knowledge and follow no thoughts except the clues which lead to what you are looking for, and the principle of non-contradiction – showing that in times of decadence, conformity is better than speculation. Those times are now behind you, since you have discovered the source of the Garden (“Strive and find yourself in selflessness,” Rumi had said. “This is the easy path, may God know better.”). What lies ahead may be a different world altogether.
Posted by Khurram Ali Shafique at Tuesday, April 20, 2010